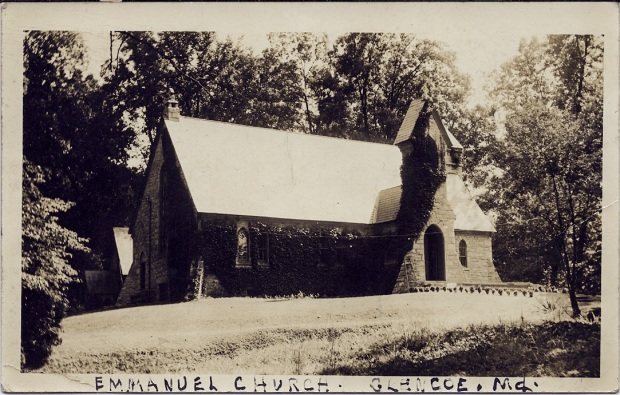 Mary Bosley Matthews Mitchell (1888-1978) sent this real photo postcard of her church to her friend, Grace Guthrie of Monkton Maryland, in 1947.

Mary Mitchell, the daughter of physician and farmer Frederick Gibbons Mitchell and Rebecca (Gorsuch) Mitchell, grew up on Retreat Farm, on Glencoe Road, in Baltimore County.

The farm came into the family via Rebecca Gorsuch, daughter of prominent county farmer Dickinson Gorsuch (1827-1882?). Retreat Farm was part of the extensive Gorsuch land holdings in northern Baltimore County,  amassed throughout the 19th century by merchant John M. Gorsuch and his descendants.

Mary Mitchell may have taken this photograph of her church, Immanuel Episcopal, Glencoe, herself, using a special amateur camera designed for creating postcards. Since we cannot see the stamp box, we can tell very little about when this card was made. (For an excellent guide to the history of real photo postcards, visit the Metropolitan Postcard Club of New York City .

Mary Mitchell remained single and lived quietly at Retreat Farm until the mid-1950s. She and her parents are buried in Immanuel’s cemetery.  Apparently, all that is left of the structures on the farm is the historic stone Gorsuch barn , now owned by a stoneware auction house.

Mary had an infamous lineage. Her grandfather, Dickinson Gorsuch, and her great-grandfather, Edward Gorsuch, were at the center of an explosive episode in the history of slavery.

In 1851 Dickinson  accompanied his father, Edward Gorsuch, and other male relations, on a journey to Christiana, in Lancaster County, Pennsylvania to retrieve several escaped Gorsuch slaves. The party was armed with a writ backed by the Fugitive Slave Law, which gave slave owners the right to reclaim runaway slaves in any state, free or not.

The disastrous attempted assault on the Parker home, where one of the escaped men was hiding, sparked violence against African-Americans throughout the area,  and became known as the notorious  “Christiana Riot.” Edward was killed; Dickinson was seriously wounded.

The incident sparked widespread discussion throughout the country. Frederick Douglass wrote of the episode in his newspaper in an article entitled “Freedom’s Battle at Christiana;” imagined depictions of the scene were published widely. Some historians hold that the violence and resulting trial raised a new awareness in the north of the far-reaching impact of the Fugitive Slave Law and moved the nation closer to war.