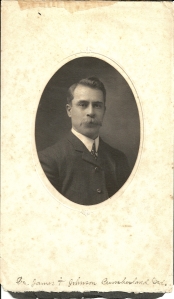 According to a fawning 1923 biographical sketch in Distinguished Citizens of Allegany County, Johnson was born in Florence, Lauderdale County, Alabama to farmer Thomas Johnson (b. abt. 1812, North Carolina).

After attending the State Normal School in Florence, young Johnson studied medicine at New York University for two years, then continued at the University of Maryland. Johnson graduated from that institution in 1892, did a year of post-graduate work there, and practiced in Baltimore until 1894, when he came to Cumberland and opened up a practice.

A news item says he was named chief physician at Western Maryland Hospital there in 1893, but neither his biography nor his brief obituary mention this.

He married a Miss Ida Mathis in 1896, and they had three children: James Thomas Johnson Jr., Elizabeth Olga Johnson, and William R. Johnson.

By 1920, Johnson was prosperous enough to live in a large house on Washington Street, probably in what is now the Washington Street Historic District, near Prospect Square, and to employ three servants. Johnson sent all three of his children to college, including Elizabeth, who attended Goucher College in Baltimore.

Johnson may have become prosperous not just through his medical and surgical practice. In 1903, he entered into a partnership with the new owner of the Wills Mountain Inn. They turned the old inn  into the Wills Mountain Sanatorium–a posh convalescent home. The structure burned down in 1930.

View all posts by waldonia