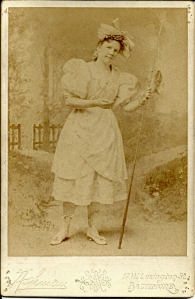 This cabinet card was taken in the studio of William Ashman, 17 West Lexington Street, Baltimore, between 1889 and 1904. Its white mount, blind embossed studio identification and elaborate sylvan background are consistent with the period.

The woman appears to be wearing some sort of seaside or bathing costume. She holds a fishing pole with one hand, and with her other hand, points to the fish (a prop, I hope) on the pole.

I haven’t been able to locate a similar costume. The 1890s bathing outfits I’ve found all have knee-length openings for the legs. Perhaps it was a stage costume?

According to the individual from whom I acquired this cabinet portrait,  the woman in the photograph probably belonged to two prominent Baltimore and Western Maryland families, the Wardwells and the Brundiges.

“This is one of the Wardwell sisters, I believe,” she says. “I own many family photos, and this one came from a group of things from their large house in Baltimore that was torn down in the first decades of the 20th century to make way for row houses.” (private communication, August 2010)

Stripped of its context and without identification, this photo is difficult to interpret. An eccentric on a spree? An unidentified stage actress? Me in the late nineteenth century?

View all posts by waldonia